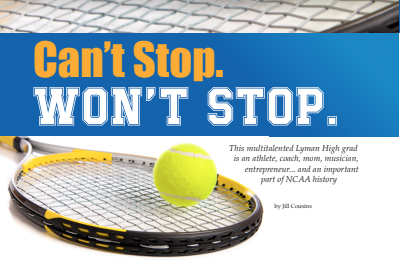 After a stellar athletic career at Lyman High School, where she starred on the tennis team and helped lead the Greyhounds’ soccer team to two State Championships, Amy (Smith) Bryant thought it was time to focus on just one sport when she left her home in Altamonte Springs for Emory University in Atlanta, back in 1992.

Amy had been playing tennis since she first took lessons at The Roth Family Jewish Community Center in Maitland at age five, and she started playing soccer about three years later when she was a third grader at Lake Orienta Elementary School. But after trying to play just one sport – tennis – during her freshman year in college, Amy was hungry for more action.

“I just like to be busy, and I get bored really easily, so it’s important for me to be stimulated on all fronts,” says Amy,  now 46. “I’ve always liked being busy, and I’m very competitive, so just having one season a year wasn’t enough. I needed more.”

Staying busy has worked out quite well for Amy. She is in her 22nd season as Emory’s women’s tennis coach and has led the Eagles to six NCAA Division III National Championships. During her own college days, she was the program’s first player to earn All-America honors in both singles and doubles and led Emory to its first NCAA tennis title in her senior year, 1996. She is also the first female in NCAA history, in any division, to win the national team championship as a coach and a player.

In soccer, Amy led Emory to the NCAA Division III Championship Round of 16 as a junior and senior, and after playing just three seasons, she graduated as the school’s all-time leader in both goals (39) and total points (98). She was inducted into the Emory Sports Hall of Fame in 2001.

Oh, and by the way, Amy also excelled in academics, graduating near the top of her class at Lyman. She’s musically talented, too, playing both the piano and flute. Now, in addition to coaching Emory’s tennis team, Amy also recently started her own consulting business for high-school athletes who are looking to play college sports. Meanwhile, she’s raising two sons, Kimball (age 14) and Miles (11) with husband Wes Bryant.

“Growing up, Amy compared herself to the Energizer Bunny,” says her mother Susan Smith. “She is a terrific mom and role model for her own children and her student-athletes. I feel her family, community, and Emory University are better places because my daughter is so involved. I am so proud of all she has accomplished.”

Amy was born in Buffalo, New York, and moved to Altamonte Springs when she was four years old. She played soccer year-round at Seminole Soccer Club, and when she was 12 years old and a student at Milwee Middle School, Amy began playing in junior tennis tournaments.

“My mom and dad [David Smith] were always on the tennis courts, my mom especially,” says Amy, who has two younger brothers, Michael and Rob. “I think they tried to get all of us into tennis, but I was the only one who stuck with it.”

Amy says she hit her stride in tennis at Emory.

“It just kind of clicked for me because of the team nature of college tennis,” Amy says. “It just meant a lot more to me than playing individual tournaments. That didn’t really resonate with me, which kind of makes sense. That’s why I enjoyed soccer so much, too.”

After graduating from Emory, Amy spent one year working for IBM and then left her job to participate in a volunteer leadership development program in Israel for a year. When she told her former Emory coaches that she was looking for a job, they created a position for her where she would be the assistant coach to both of them and she would also start a marketing program for Emory athletics. Around the same time, Amy started working on her master’s degree.

“So I was really busy,” Amy says, “which is very common for me.”

About six months later, the tennis coach resigned, and Amy was named Emory’s head coach at just 24 years of age. She was thrilled to take on the challenge and continues to relish the opportunity to coach and inspire student-athletes.

You can read the story in JLife (Orlando’s Jewish Lifestyle Magazine) here.