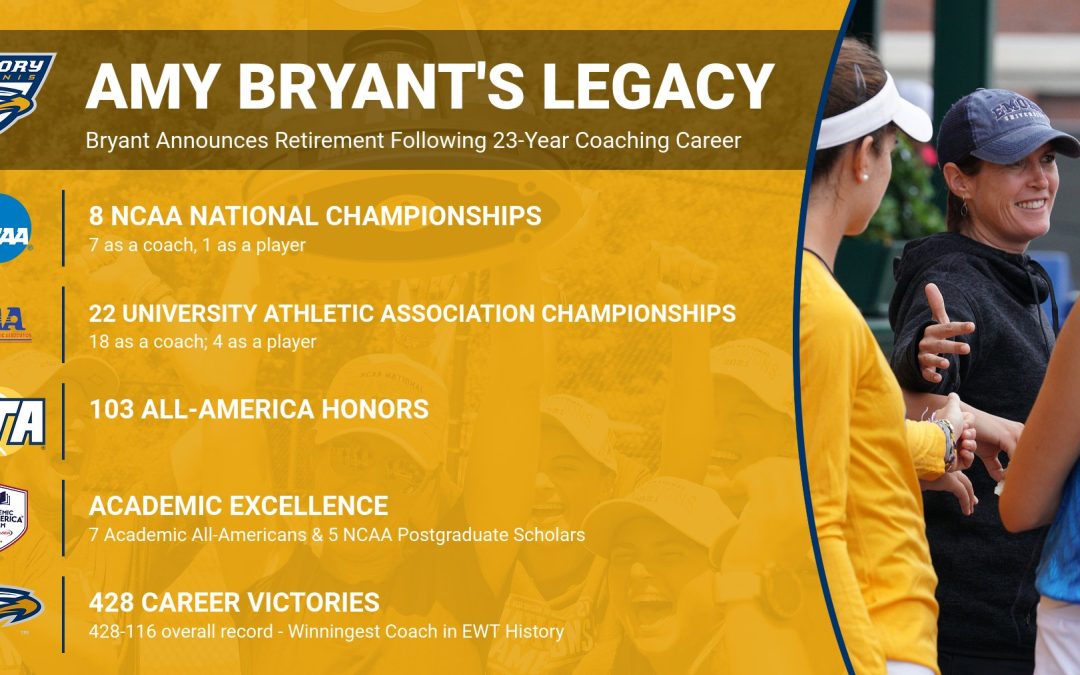 Emory University women’s tennis coach Amy Bryant has announced her retirement following an illustrious career with the Eagles that spanned nearly three decades. Bryant, who guided the team to seven national championships and 18 University Athletic Association championships during her legendary coaching tenure and was the first woman in NCAA history to win the national team championship as both a coach and player, will officially retire on August 31, 2022.

Bridget Harding, who has been a member of the coaching staff since the 2018-19 season, will handle head coaching duties on an interim basis.

Since taking over the head coaching role in 2000, Bryant elevated the Emory women’s tennis program into one of the premier tennis powerhouses not only in Division III but across all levels of collegiate tennis with her teams reaching unprecedented levels of success. In 23 seasons, Bryant’s teams compiled an overall record of 428-116, reaching the NCAA postseason in every season besides the COVID shortened 2020 campaign, advanced to 21 national quarterfinals, 18 national semifinals and 13 appearances in the national championship match, tied for the most by any program during that stretch.

“I am so grateful for the opportunities Emory Athletics has afforded me over the last 23 years,” Bryant said. “It was a privilege to work with such inspiring colleagues and incredible student-athletes. I will forever be Emory Women’s Tennis’ biggest fan and I look forward to cheering for Bridget as she leads the team to even more success in the future.”

A five-time Intercollegiate Tennis Association Regional Coach of the Year as well as the ITA National Coach of the Year in 2003, Bryant has overseen a Division III-leading six singles national champions (Mary Ellen Gordon in 2003 and 2004, Lorne McManigle in 2009, Gabrielle Clark in 2012 and 2014 and Ysabel Gonzalez-Rico in 2019) and five doubles national championships (Mary Ellen Gordon/Anusha Natarajan in 2001 and 2002, Mary Ellen Gordon/Jolyn Taylor in 2003 and 2004 and Ysabel Gonzalez-Rico/Katie Chang in 2021). Furthermore, Bryant has seen her players earn a total of 103 All-America honors, 13 conference Most Valuable Player awards, five NCAA postgraduate scholarships and seven Academic All-America selections.

No stranger to Emory, Bryant joined the coaching ranks following a tremendous undergraduate career with the Eagles where she became the first women’s tennis player in school history to earn All-America honors in both singles and doubles and captained the tennis team to the first-ever national championship in the history of the University in 1996.

In addition, Bryant was the runner-up in the NCAA national singles championship her junior season and teamed up to reach the semifinals of the NCAA doubles championship her senior year. At the time of her graduation, Bryant ranked fifth on the school’s all-time list with 76 career singles victories and fifth in career double victories with 66. She compiled a 24-4 singles record her junior season and was selected the conference’s Most Valuable Player her senior year. All four years, Bryant made the All-UAA First Team in singles and doubles and was part of four UAA championship teams.

Furthermore, she was a standout on the Eagles’ soccer team where she twice made the All-Region team across her three seasons, graduating at the time with the school record for career goals and points. She was a two-time female winner of the school’s Bridges Award as its outstanding all-around athlete and won the McCord Award her junior year for outstanding individual athletic achievement.

Bryant was inducted into the Emory Sports Hall of Fame in 2001 and currently resides in the Atlanta area with her husband, Wes, and sons, Kimball and Miles.

For the past 23 years, Amy established herself as a tremendous leader and mentor to tennis student-athletes, while winning national championships along the way.  As the winningest coach in program history, her legacy will not be forgotten.  What I appreciate most about Amy is her passion for helping her coaching colleagues grow professionally and her ability to develop and maintain relationships with Campus Life partners. I wish her the best as she embarks on her new professional journey.

Amy began writing her Emory success story as a student-athlete and continued it as head coach.  During Amy’s tennis playing career, the Women’s Tennis team won Emory’s first NCAA National Championship and once she became head coach, she has written the record books for the Women’s Tennis program.  Amy exemplifies the true essence of coaching, to develop and mentor student-athletes allowing them to reach their potential. I am so grateful to have worked alongside Amy, cheering her and our teams on all these years.  Thank you Amy!

There is no one better than Amy Bryant in the collegiate coaching world. She is a brilliant coach, a caring mentor and the ultimate professional. Simply stated, Amy is the complete package. Not only did she raise the bar at Emory, but she has set standards nationally that coaches will strive to match for many years to come.

Amy is synonymous with Emory Women’s Tennis. I’ve been lucky enough to work with her as a player and a coach for the last eight years- during which time I’ve watched her embody the true values of leadership, selflessness, and perseverance. Anyone who has had the privilege of playing for Amy will tell you that she is so much more than a coach. She is a friend, a confidant, a mentor- and the person who pushes you to reach your potential, because she often sees greatness in you before you can see it in yourself.

Amy has built this program from the ground up- not only into a tennis powerhouse, but into a family that spans 23+ years of graduating classes. To be a part of EWT is to be a part of something bigger than yourself, and Amy has instilled that culture in each and every one of her graduating players. She is leaving behind a legacy of excellence, integrity, and genuine love for the program and people that were a part of it. I aim to carry on her legacy and continue to drive this program with the values that will always remain at its core. Amy is so loved and admired- I know I speak for all of us at EWT when I say that we are so happy for her and wish her the best of luck in this next phase of her life.

Congratulations to Amy as she closes out an historic coaching career! Her success is inspiring and I feel lucky to have played for Amy for four years. Amy pushed me and my teammates to be better athletes, better students, and better people. She helped me pull all the pieces of my game together in my first semester at Emory and I reached a level of performance and success on the tennis court that I would never have thought possible.

Reflecting on my time on the team, of course I think about how thrilling it was to rack up eight national championships, but more importantly, I remember those years as being some of the most fun that I’ve ever had thanks to the team environment that Amy fostered. She held us to high standards and the lessons I learned in my four years competing and being part of the women’s tennis team at Emory continue to serve me well in my personal and professional life. Amy has left a remarkable legacy at Emory and the women’s tennis program wouldn’t be known for embodying an unmatched combination of fun, athletic success and academic excellence without her example and leadership. I know I speak for all the women’s tennis alums in wishing Amy all the best in her next adventure.

Amy has been an incredibly influential person in my life, not just as a great coach but also as a role model and friend. Like many other women in the Emory Tennis Program, Amy coached me through an NCAA national championship, a moment I’ll never forget. However, the memories I will cherish most are unrelated to tennis – they are team holiday celebrations at Amy’s home with her family, climbing a volcano in Hawaii with our team hand in hand, celebrating former teammates’ weddings together or meeting Amy at a Cracker Barrel to catch up seven years after graduation. The tennis student-athletes at Emory are extremely fortunate to have had Amy as a leader and advocate throughout their collegiate experiences and beyond. Amy, congratulations on your amazing career at Emory and I wish you nothing but the best in all future endeavors!

Having Amy as my head coach during my four years at Emory made a tremendous impact on my life. She taught me the importance of setting a goal and then focusing on the “process” and putting in the work to make it happen. Not only did that lead us to win two NCAA national team championships during my time at Emory, but it has also allowed me to replicate that process in my career, and receive promotions by “focusing on the process” and taking control of my own career.

When I was struggling to make the adjustment and adapt to my new life at Emory when I was a freshman and sophomore, Amy went out of her way to ensure I had the support I needed to succeed. This meant she found resources to help me learn and study effectively for my classes, overcome mental health obstacles, address injuries, and get me in the best physical shape for peak performance. So much of that has translated to my life post-college, and I’m incredibly grateful for the role Amy played in teaching me how to regulate my own emotions and find coping mechanisms that help with keeping a stable and positive mindset and persevere in the face of hardship or challenges.

Resilience is such a difficult quality to instill in another person, and somehow Amy did so. In large part due to Amy’s coaching, I know that when I fall, I have the ability and toughness to stand back up and keep going. Thank you, Amy, for all that you have done for the Emory Women’s Tennis program, its surrounding “family”, and my own perspective on life; I would not be who I am today without you!

Emory Women’s Tennis would not be what it is today without Amy’s incredible hard work and dedication over the last 23 years. I feel honored and lucky that I had the opportunity to play on the team during her tenure and luckier that we’ve remained friends since. The championships and records of course speak for themselves, but the impact she had on me and other players far exceeds what those numbers could ever say. She created a family away from our own, provided guidance not only on the court, but off as well. She instilled in us what it means to work hard, but how important it is to stay in the moment, trust the process and cherish each day along the way.

The legacy Amy will leave at Emory and with EWT will last generations to come. She’s built a world class program out of which her players have proven to be world class people. I always dreamt for the opportunity to be highly competitive at the collegiate level, but to feel like you’re a part of a family or unit fighting for something greater than yourself (especially having grown up playing the sport as an individual) is one of the most rewarding experiences I’ve had to this day and will probably have for a long time to come. None of that would have been possible without Amy and the care she put into developing us as athletes, students, and as individuals.